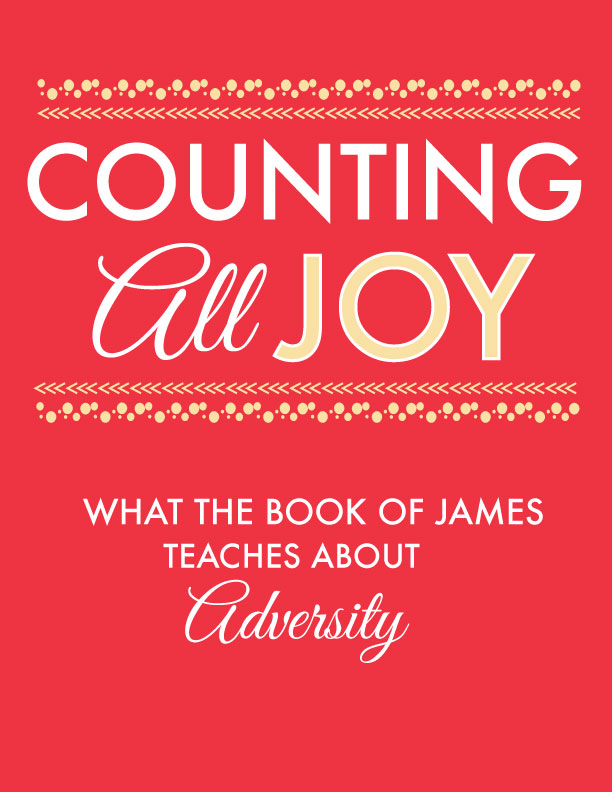 Did you know that the Book of James was written by Jesus’ brother?
I think one may easily assume that it was written by the James who was in the First Presidency with Peter and John… but that is not so.

Can you imagine talking with this James? Oh, what stories he would have to tell. Did he share a room with Christ? Did they do chores side by side? Did they walk the streets of Nazareth together? Were they both carpenters? Imagine the details of Christ’s youth and life he could share. And not just of that! As a son of Mary and Joseph! What things he could tell us of their home, their conversations, their family traditions.

This James was a Bishop in Jerusalem. Consider what he must have been dealing with there. Beyond the typical issues that we cope and deal with, he still had the fresh history of the crucifixion of his brother. And a new, growing church. And resistance to giving up the Law of Moses.

From growing up under the tender, wise, and watchful eyes of Mary and Joseph, to gaining experience in this world alongside a perfect Brother, to watching His Brother’s ministry and miracles, to experiencing a grief that perhaps we haven’t considered when his eldest Brother was crucified, to being a Bishop in the central city of Christianity and Judaism. This man has a lot to say.

It was James who wrote the scriptures that changed the course of Joseph Smith’s life, and therefore my life too.  He simply explained how to get an answer when you really needed one.  He knew that we would all be hanging on precipices over and over in our lifetimes and that we would need God’s guidance.

5 If any of you lack wisdom, let him ask of God, that giveth to all men liberally, and upbraideth not; and it shall be given him.

6 But let him ask in faith nothing wavering. For he that wavereth is like a wave of the sea driven with the wind and tossed.

In general, I think we typically refer to James 1:5-6 in the context of the Restoration of the Gospel.  We immediately think of Joseph Smith.  However, James’ message was much broader than that.  It was to all of us.  Look what he says in the three scriptures just before:

2 My brethren, count it all joy when ye fall into divers temptations

3 Knowing this, that the trying of your faith worketh patience

4 But let patience have her perfect work, that ye may be perfect and entire, wanting nothing.

Is that how you feel? In verse two?  Do you count it all joy when you fall into various afflictions (that is the JST for that word).  I don’t know about you, but I’m not too eager to sign up for suffering.  I want to somehow achieve verse four without verse two.

That word “perfect”, in verse four, means “whole and complete”.  It comes from the Greek word “telios”.   Elder Russell M. Nelson gave a talk about it in 1995.   He talked about how it means to reach a distant end, to be finished.

And somehow, James knows that suffering has a way to make us more whole, more complete, more finished.

Do you know C.S. Lewis and his story?  Did you know that his wife died of  cancer just four years after they were married?  THAT is one of my great fears… losing my husband before I am ready.  And I don’t think I will ever be ready.  Ever, ever, ever.

Elder Holland gave a talk, that I love called “The Bitter Cup and the Bloody Baptism,”  and in it he quotes some really raw words from C.S. Lewis.

“One marvelously gifted man, a convert to Christianity, slowly watched his wife dying of cancer. As he observed her slipping away from him with all that she had meant and had given him, his newfound faith about which he had written so much and with which he had strengthened so many others now began to waver. In times of such grief, C. S. Lewis wrote, one runs the risk of asking:

“‘Where is God?
. . . When you are happy. . . [you] turn to Him with gratitude and praise, [and] you will be. . . welcomed with open arms. But go to Him when your need is desperate, when all other help is vain, and what do you find? A door slammed in your face, and a sound of bolting and double bolting on the inside. After that, silence. You [might] as well turn away. The longer you wait, the more emphatic the silence will become. There are no lights in the windows. It might be an empty house. . . . [Yet he was once there.] What can this mean? Why is [God] so present a commander in our time of prosperity and so very absent a help in time of trouble? [C. S. Lewis, A Grief Observed (New York: Seabury Press, Inc., 1961), pp. 4­5]

“Those feelings of abandonment, written in the midst of a terrible grief, slowly passed, and the comfort of Lewis’ faith returned, stronger and purer for the test. But note what self-revelation this bitter cup, this bloody baptism, had for him. In an obligation of quite a different kind, he, too, now realized that enlisting for the duration of the war is not a trivial matter, and in the heat of battle he hadn’t been so heroic as he had encouraged millions of his readers to be.

“‘You never know how much you really believe anything,” he confesses,
“‘until its truth or falsehood becomes a matter of life and death to you. It is easy to say you believe a rope to be strong and sound as long as you are merely using it to [tie] a box. But suppose you had to hang by that rope over a precipice. Wouldn’t you then first discover how much you really trusted it? . . . Only a real risk tests the reality of a belief. [Lewis, p. 25]

“‘. . . You will never discover how serious it [is] until the stakes are raised horribly high;

<p”‘[So God is, then, something like a divine physician.] A cruel man might be bribed–might grow tired of his vile sport–might have a temporary fit of mercy, as alcoholics have [temporary] fits of sobriety. But suppose that what you are up against is a [wonderfully skilled] surgeon whose intentions are [solely and absolutely] good. [Then], the kinder and more conscientious he is, [the more he cares about you,] the more inexorably he will go on cutting [in spite of the suffering it may cause. And] if he yielded to your entreaties, if he stopped before the operation was complete, all the pain up to that point would have been useless. . . . [pp. 49­50]

I know there are not only tears [yet] to be dried but stains [yet] to be scoured. [My] sword will be made even brighter. [p. 49]

“God wants us to be stronger than we are–more fixed in our purpose,
more certain of our commitments, eventually needing less coddling from him, showing more willingness to shoulder some of the burden of his heavy load. In short, he wants us to be more like he is and, if you haven’t noticed, some of us are not like that yet.”  (BYU Devotional, January 13, 1987)

A perspective we all need?  Elder Holland and James are teaching the same principle here.  The divine nature of adversity in our lives.  And James wants us to know, that when we are at those points in our life, we can ask of God.  And  he will answer.