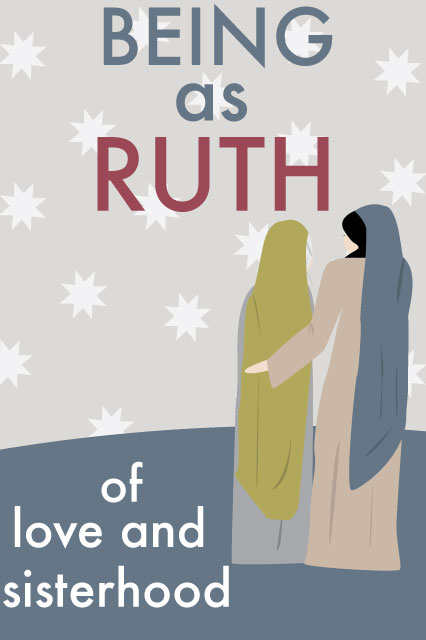 President Boyd K. Packer gave a really impressive promise to all of those who are part of relief society:

“This great circle of sisters will be a protection for each of you and for your families. The Relief Society might be likened to a refuge – the place of safety and protection – the sanctuary of ancient times. You will be safe within it. It encircles each sister like a protecting wall.” (Daughters in My Kingdom, page 81)

That is a really heavy assurance he is offering to us. And it doesn’t come without many, many, many inspired women who are ready to act.

I have loved Ruth (from the Bible) for a long time. However, I feel like I am just now, starting to understand her amazing character. She holds a place in a book of the history of the world that Heavenly Father wants us all to study in great depth. What is it about her that we are to understand and become?

Ruth was the daughter-in-law of Naomi. Naomi and her husband and two sons left their home of Bethlehem into the country of Moab which is east of the Dead Sea. At some point Naomi’s husband died and she was left in the care of her two sons who then married and lived in Moab for ten years.

We do not know how, but both of those sons also died. Imagine the grief of a mother who lost her husband and two sons. Not only must she grieve their loss, but she must also wonder how she can survive and get by. She is in a condition that her husband and sons would never want to see their mother in. She is a widow during a famine. She is truly destitute.

They wept together and Orpah returned to Moab, but “Ruth clave unto her” and gave her quite a speech convincing Naomi that she was not going to change her mind, “when she [Naomi] saw that she was steadfastly minded to go with her, then she left speaking unto her.”
So what we have here is a woman (Naomi) who is destitute. Never before has she grieved so much, and never before has her faith been tried so much. How would she survive? She is a widow with no sons, and during a famine! We don’t know about her family situation back in Bethlehem, but when she and Ruth arrive, Ruth “gleans” in the fields of Boaz. That means that when workers drop the corn they are carrying, that she would go and gather those pieces left behind – something only the extremely poor would do.

This is what I love about Ruth. First, she recognized the true needs of Naomi, and then she acted on it – even when it was hard and very inconvenient.

Naomi said to return to Moab, but Ruth knew that wasn’t what Naomi really needed. Naomi, maybe for the first time in her life, needed someone else to help her. She was out of options and Ruth was her solution. And not only could Ruth discern Naomi’s needs, but she had the charity to offer her exactly what she needed – at all costs.

Ruth was Naomi’s refuge, her sanctuary, her protecting wall (as President Packer put it).

Everyone one of us will have Naomi moments in our life. We will have times when we need true service from others, we will need a Ruth. We will need her to discern our needs and act on them, even when we are saying to “go back to Moab” – because we, like Naomi, don’t want others to be inconvenienced or disturbed because of our trying times.

We will also have many times when we need to be a Ruth. Where we need to learn how to discern other’s needs and then gain the glorious gift of really knowing how to serve that person – how to give them what they really need. And then we need the gift of acting on it until it is finished. Those are three separate things: 1- discerning the need, 2- knowing what to do for them, and 3- acting on it through its completion.

Discerning the need is the first thing that has to happen. This means that our eyes and hearts must be open to our sisters around us. We never know what each other is facing, but this is mortality and so we can assume that if there isn’t something now, there will be something later.

I remember when I was traveling through a small town along the Caribbean. We were walking along the main cobblestone road in town and we were approaching a covered area that was buzzing with women. “What is that?” we wondered and upon closer inspection we found it to be the place where the women gathered to scrub their clothes or rather, do their laundry. There was some scrubbing taking place, but there was much more talking. This was likely a daily occurrence for them and probably a very important part of their society. It reminded me of when Abraham sent his servant (Genesis 24) to find a wife for Isaac. Where did Isaac go? The well. Why? That is where the women were.

These places of laundry and these wells are more than just places where water is available. They are places of healing, of hope , of help. Places where women gather and lean on each other, laugh with one another, and weep together. That is where they came to know EVERY other woman in her town. And of all the fancy buildings, these places are more likely to be the true heartbeat of the society. THIS is where people learned of others, what was happening, and who may need help. How many times do you think a woman returned home only to drop off her water jug or bag of wet clothes so she could attend to a situation she learned of at the well?

But what happens when you get indoor plumbing and can get all the water you need supplied directly to your house? What happens when those daily interactions leave a society? How does that impact how many neighbors we know and how well we know them? How does that affect the love we have for each other and the urgency we feel when we hear of their troubles?

This has been one eye-opening experience for me since staying at home to raise my daughter. Previously I was around my students and fellow seminary teachers all day long. I had plenty of interaction, conversations and opportunity to help others. But when I came home and hung up my teacher/career hat I had been wearing for 13 years and began caring for an infant, I desperately missed having people around. It was something I hadn’t really thought about. When preparing for motherhood I was thinking more about what diaper cream was best, not about the deeply rooted characteristic of women: that women need each other.

But there was no well to go to and my washer and dryer were working just fine. This situation made me painfully aware that we, especially during the winter, can be very lonely. And this circumstance makes it less likely that we will know about each other and how to help one another.

So I have wondered about Ruth and what she would be like in this modern world.

Imagine what Naomi’s story could have been without Ruth. Ruth is a true example of a gracious woman. She offered Naomi something that Naomi couldn’t get herself. And what is more Christlike than giving someone that kind of service?

The fascinating thing is that the story doesn’t end with Ruth gleaning in the fields. Ruth ends up marrying Boaz, the man whose field she gleaned in. She and Naomi were now part of a great and righteous family. And it doesn’t end there. Ruth has a son named Obed, and he will have a son named Jesse, who will then have a son named David. That is the David who slew Goliath, the David who will be the great King of Israel, and the David of whom the royal Davidic line is named after, and of whom the Messiah would be born. Ruth is a direct grandmother of Jesus Christ. I doubt she was thinking about that when she was walking through the hot desert to Bethlehem and when she was looking for corn that had been dropped.

So a question we could all ask ourselves is this: Who in my life needs me to be a Ruth today? A question like that can invite angels to attend us as we join them in their efforts to save, to comfort, give help and hope.

Here are three quotes about Relief Society, a bookmark, and a picture of Naomi and Ruth: 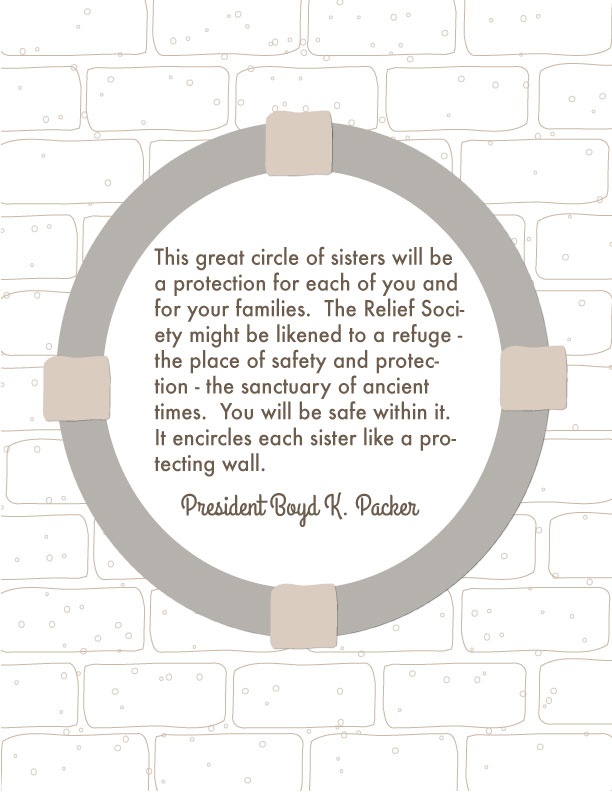 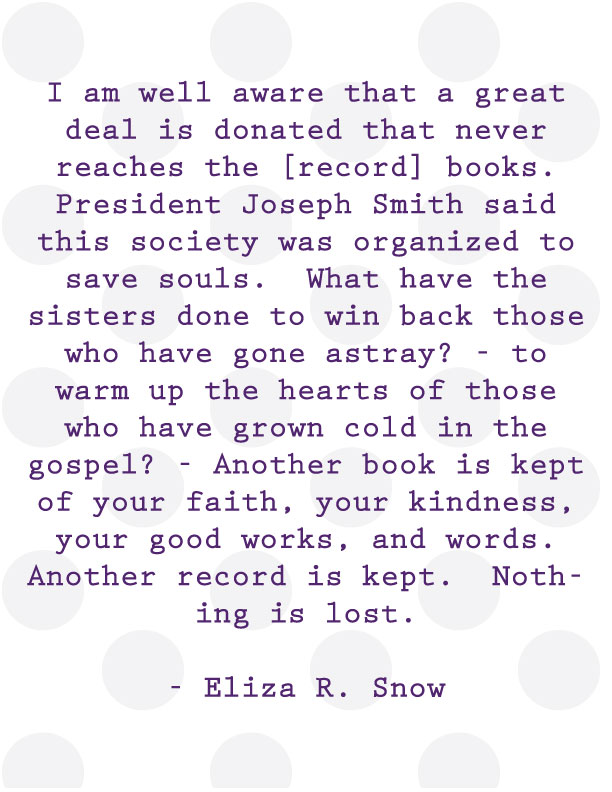 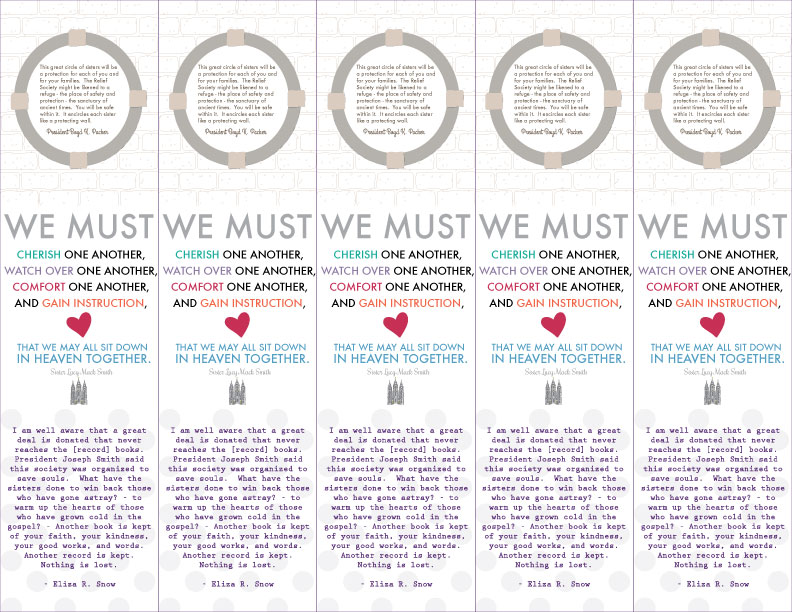 Here are all of the above quotes in one PDF:  sisterhood quotes printables

And here is the picture of Ruth and Naomi: 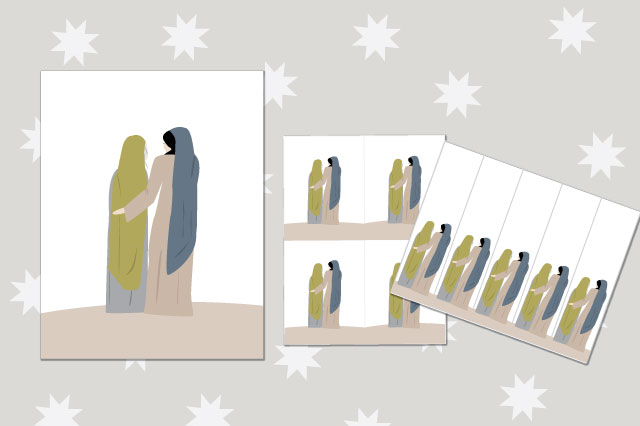 You can find these pictures HERE.

We left the background of these pictures white, symbolizing the future they are walking towards.  As a teaching tool you could give these out and have each person write downy their own thoughts about Naomi and Ruth’s future and how Ruth’s service  contributed to that.  They could also write their thoughts about how they could learn from Ruth and how their service could make a difference in another’s (and their own) life.