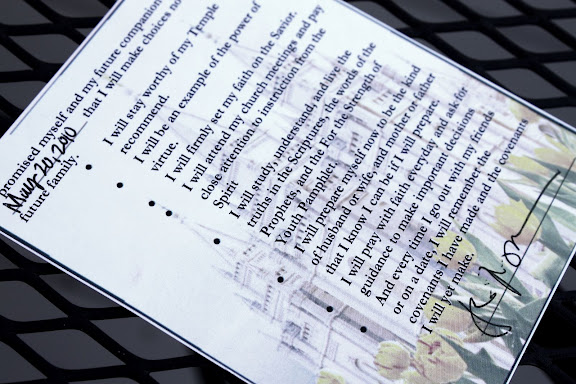 Even though your young women don’t know who their future husband is yet,

(although some of them may think  or hope they have)  they are totally and completely living their love story right now.  Isaac never met Rebekah before they were ready to be married, but the Lord brought them together because they qualified for each other.

In all of the years leading up to the point until they married, they had each been making their own choices and living a certain way so when the time was right, they were both prepared and worthy.

I remember someone saying to me when I was a teenager,

And I thought to myself – that makes so much sense! And that little saying rang in my soul through all of my dating years until I met my husband.    I knew couldn’t control what my future husband was doing in his life – but I could control what I was doing in mine.  I had the power to try and become the kind of person I would want to marry.  And now that I have made my choice in a husband, I realize that in a way, I did have some control over the choices he was making, because I ended up choosing a guy that was like me in standards, values, and principles, and so our histories ended up being pretty similar.   Because it was those histories that qualified us for each other.

Read this scripture to your young women and ask them what it has to do with their future spouse:

(We will attract the kind of person WE are).

I like to paint a picture for my students of  a really good guy or girl – for example, I may say, “Amy – what if I told you that your future husband was a really righteous young man… he plays basketball and his team says that they never hear him swear… in seminary, he always volunteers to pray when someone asks… when their was a new kid in school he made sure to show him around the school and helped him find a group of friends that he felt good with… he got his mom flowers the other day just to say thank you… he is early to church every week because he magnifies his Priesthood and attends to his duties… he waited until he was 16 to date, and now he dates but he doesn’t steady date, and sometimes he and his friends ask out girls that they think haven’t had a date before just so she can have a date in high school… (you could get quite creative in your description of him).

Watch your young women swoon.  They will want this kind of guy – which will open up for a very interesting “ah-ha” moment for themselves.  Because you could then ask them, “what kind of wife do you think this guy wants? … Let them answer this question.  Ask them what this guy would want his wife to be doing during high school.  (By the way – this would be a GREAT time to discuss that the Personal Progress program is designed to do for the young women exactly what this kind of guy wants in a future wife).

I have become so very aware, that many of the youth are not connecting their behavior now with the future they want.  Many of them are not focused on the things that will bring them the most happiness.  If you want a really good talk to drive this home – read this talk.

Now,  give them the Temple marriage card.  This is a card meant for the youth or young adults who are not yet married.  Actually, it is not for them – it is for their future spouses.  Your young women should read, date, and sign the card and then put it right into their wallet.

This card should be with them everywhere they go from this point on!

It is a promise to their future husband that they are making choices right now for him and for their future family.  So, every date, every hang-out, movie, vacation, class… everywhere they go THIS CARD WILL BE WITH THEM.

And then on the day they get married,

they can pull this tattered and torn card out of their wallets and give it to the person they have been waiting and preparing themselves for.

This card should represent thousands of decisions that have been made to get her to the point to qualify for that young man she just married.

Can you imagine a greater gift?

* You could also have them write a letter to their future husband in connection with this card.  They could explain to him what this card is and what its purpose is.  In fact, I think it would be AMAZING if they added to the letter every year – reporting to him the things she is doing and how she is preparing herself for their future family.

*  Here is a handout of quotes you could use:  Quotes and Marriage and Dating  (they are two to a page so they can fit in a journal if you are keeping one)

And here is the card again:  temple wallet card

See our Teaching Helps for the lessons title “How can I prepare now to be a righteous wife and mother?” HERE 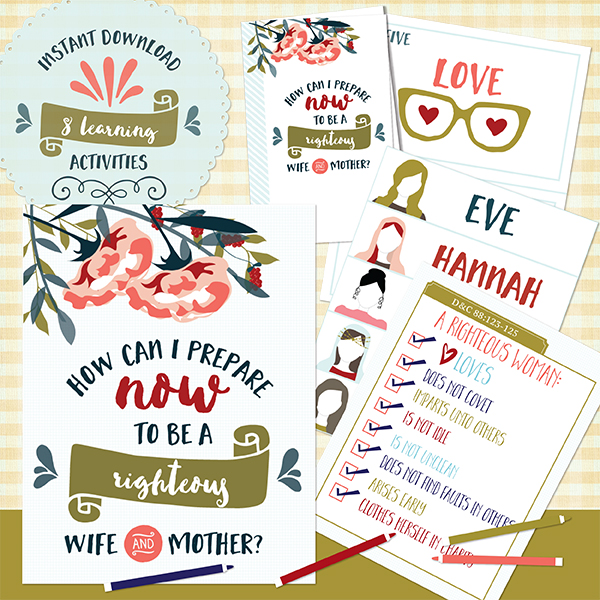